The Lopez filibusters seized Cardenas, Cuba, on May 19, 1850. The rebel flag is burning of the Capitular House. 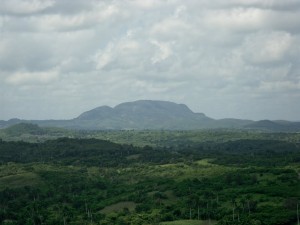 The Town contains some 5,000 – 6,000 inhabitants mostly Spaniards, but many Americans there are in the Bay 17 Yanky Brigs & Barks after Molasses as this is a large shipping place for that article. The Capt of one of the Barks died suddenly yesterday afternoon of appoplexy. All the colours are half mast All here are Catholics & there is only one church[10] it is quite a nice one & sufficiently large for the place I went to mass this morning & was highly pleased with the music as instead of an organ they used the band. The only difference I could perceive between their Services here & other catholic churches I have seen is there are no pews All are seated on the floor on Mats or Rugs. The floor is made of marble pavement 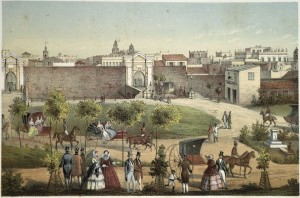 The Houses are all built of lime stone rock (of which the Island appears to be formed ) The walls are thick, only one storey high about 20 feet pitch & the whole interior of the roof to view The windows are large & extend the entire height of the house without glass & with a strong iron grating the whole height. The doors are as large as barn doors & as heavy as jail doors with strong iron fastenings & smaller doors to be used by individuals. The streets are well paved with lime stone rock Each house has its yard enclosed with a heavy thick wall, and every family can at a moments warning baracade himself in his own premises. There is a first-rate rail road running through the principal street to the Havanna which is distant 126 miles The fare is from $9 to 3 1/2 according to the Quality of the passenger[11] 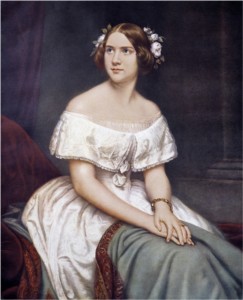 The Steamer Isabel[12] arrived yesterday We have just heard of her arrival Jinny Lind came in her & is to hold her first concert day after tomorrow As I did not hear her at home I shall go to the Havana to enjoy that pleasure I hear they have the largest & most magnificent theatre in the world so I expect to be highly gratified & will give you a full account when I get back home[13] – Today is the first holaday of the year being Kings Day No one works particularly the negroes, they are as thick as Black birds here & whilst I am writing there is a crowd passing led by one dressed in the most fantastic manner imaginable – his head covered with a red cap hung with strips of calico of the most flaring colours reaching to his feet with a thick gause covering to his face which of course cannot be seen. He gives the song which is sung by the followers accompanyed by 6 or 8 coarse drums.[14] 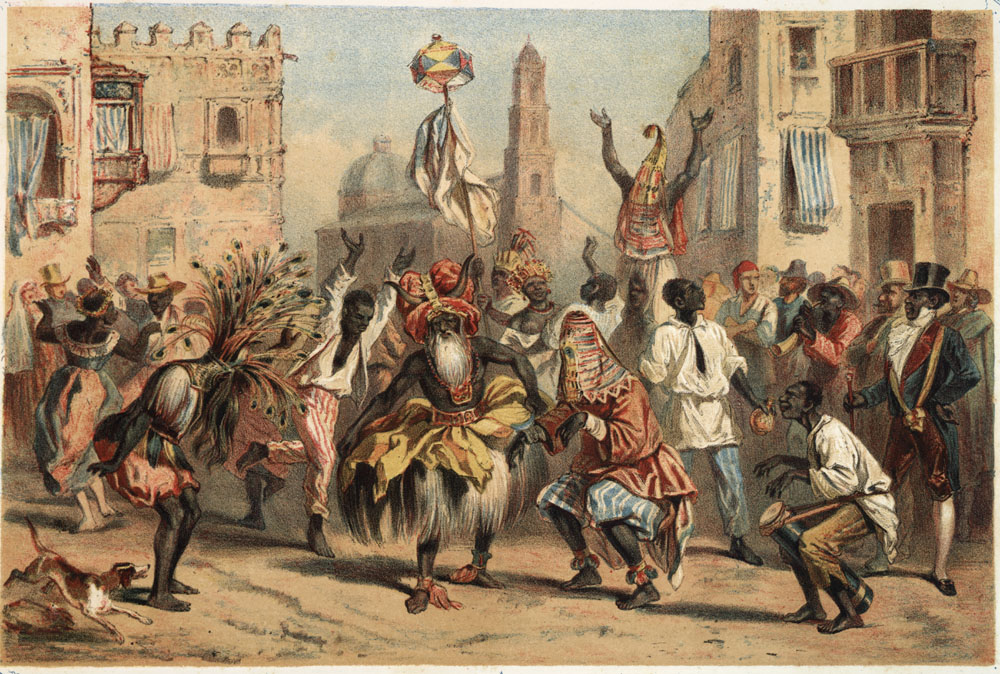 Celebration of the Day of Kings, also known as the Twelfth Day Festival (January 6), by Federico Mialhe c.1851. 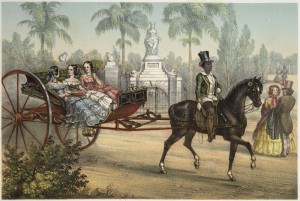 A Cuban volante in the Paseo.

The Christmas tradition of John Konnering was practiced in Edenton until the 1880’s; Tristrim Skinner would have been well acquainted with it, and his new wife, Eliza, may well have witnessed a similar celebration by the time she received this letter. Clifford L. Staten, The History of Cuba (Westport, Conn: Greenwood Press, 2003), 25; Bertram Wyatt-Brown, Southern Honor: Ethics and Behavior in the Old South (Oxford: Oxford University Press, 1982), 444; Guion Griffis Johnson, Ante-Bellum North Carolina: A Social History (Chapel Hill: University of North Carolina Press, 1937) 553.

Note: The text of this page, and any other modern editorial content, are copyright © Mary Maillard