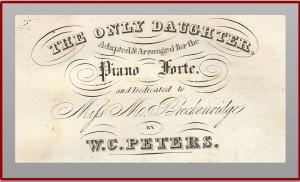 Your letter was received by me yesterday so I hasten to answer it knowing that procrastination is the thief of time – & to correct all evil impressions you may have received from my letter to Mrs Galt – I am very sorry that my mentioning [illegible] engagement about Elisa & yourself should have given you so much uneasiness – it was done in a playful manner one no ways calculated to give offence to either party so forgive me & let it pass off – I never knew you to be at all wrothy before – I can hardly believe it possible that it is true. What did I say to offend you – let me know & it shall be corrected.

We have not heard from Mr S. does he not treat us shamefully Cousin Peggy told me that he tells every one that I have discarded him – which you know is a story – but I intend doing so as soon as Pa returns from Belgrade. he has been there for a week & I cannot say when he will return home Some person said he heard that he had gone to the Bar also Uncle Joshua to see about the Picket [Pigot] which was supposed to have been lost – but I know not what they are after. I do not feel unhappy concerning the treatment of Mr S. but think it fortunate that I have made such a lucky escape Cousin Peggy dined with me yesterday she says she would not have him to save his life even should he come to night – his conduct is so rascally. that letter I told you about was from him – there is neither head nor tail to it – I will tell you more about it when I have read it – keep this to yourself. how different his conduct is from that of Dr Warren – he behaved so honourably even when I had injured him so deeply indeed I love him more than ever & if Father would give his consent I do not know what might happen. 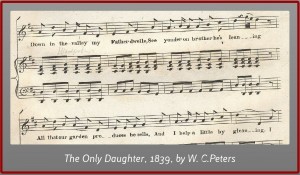 he is not rich nor of great birth but he is my equal & my superior in some respects every body loves him – I have been anxious to marry a great man one who would be distinguished in the world – more to please my Father than myself so I gave up one whom I loved devotedly for one whom I admired & who I knew would please my friends – & now see what it has all come to – the most distinguished men do not make the happiest husbands by a great deal – neither does wealth for I have that & am not happy. but I have moralised sufficiently for the present – We took a long ride on horseback the other day with Dr W & Mr C. enjoyed it very much. the first time I have been since last spring. I ride the old grey named Lichiel perhaps you remember him – We have had a great deal of sickness both here & at Belgrade but I believe no losses. Miss Creecy is getting better – Aunt Hoskins has had her sale & broken up house keeping she leaves home next week for Norfolk – I hear you took dinner with Mary the first time she dined in her own house – do tell me how she is fixed. nicely I presume – she seemed much gratified that you dined with her. Caroline & Mr C are still with us C is anxious to take a likeness of Annie so that you may see how thin she has grown since her sickness – so I must leave her a little space – I know you will be grateful – & pleased with the drawing – I suspect it will be her chef doeuvre.

[drawing of thin figure with black hair and a cap, carrying a tray of glasses] 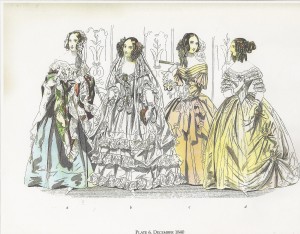 Carry says she heard that you had been visited by the Blue devils. she hopes that the contemplation of this beautiful drawing will prevent you from having them. show it to the Devils & they will flee from you. I told Cousin Peggy you were rather low spirited she says you must not be so. In one volume of Shakespeare I found a piece of paper with the commencement of a speech written on it – is it of any consequence if so – let me know & I will copy it for you. It is dinner time so I must bid you good bye – this is the third letter I have written to day – My love to Mrs Galt & family I hope she does not mean to treat me as I did her. Carry sends her love – we are to have a candy boiling this afternoon – I wish you could be here to eat some of it. You wish to know who were Elizabeth waiters I have forgotten the names of the two Norfolk gentlemen so you may judge they were not very agreable. the other two were Mr Haughton & Dr W Norcom the Ladies were Miss Martin Miss Elliot – Miss Bonsal & Cousin Hariet. they have all returned to N – Mr & Mrs Bloodgood were here – she said she was a friend of Mrs G’s. Write soon – & in little better spirits than you did the last time. Ever your affectionate Sister