Young Love in the Old South 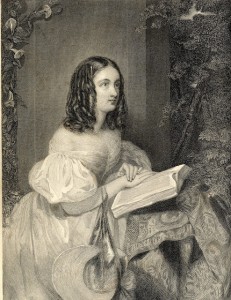 In the early spring of 1841, thirteen-year-old Eliza Fisk Harwood of Williamsburg, Virginia, wrote a letter to her friend Tristrim “Trim” Skinner so crammed with news that it was practically unreadable. What she considered to be her most important news, however, were two parties she had recently attended. At the Twelfth Night gala she had appeared as a “a great belle” and had danced so long that she had worn holes into her new satin shoes and hose; then, at the Fair held in February at the Court House, she had watched, fascinated, as a gang of college boys gathered around the whisky punch bowl and recited a hilarious poem. Eliza was so impressed by the students’ parody of the 1777 mock epic poem, The Belles of Williamsburg,[1] that she copied out all twenty-eight stanzas of the doggerel verse into every spare centimeter of white space in her letter. 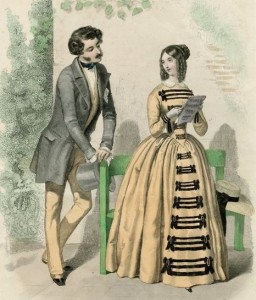 The resulting manuscript is an interlinear mess, a transcriber’s nightmare; it is also a key to Williamsburg’s gentry in the 1840s, the beginning of a documentary record that reads like both a society column and a social register. Belles, beaux, rumored engagements, and weddings – these were the stuff of Eliza’s letters. She wrote during the heyday of the College of William and Mary when it thrived under the presidency of Thomas Roderick Dew, the paternalism of Judge Nathaniel Beverley Tucker, the scientific rigor of John Millington, and the old-world scholarship of Charles Minnigerode. Tutored under some of the South’s brightest minds, the younger generation caught in Eliza’s energetic prose would emerge twenty years later as the backbone of the Confederacy. Frank, funny, sweet, sad, richly detailed – Eliza’s observations are a priceless contribution to Williamsburg’s antebellum social history and possibly the only such coherent record of the town’s prominent citizens to survive from the 1840s.[2] 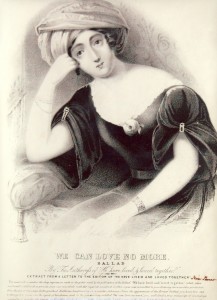 The cover of Eliza Harwood’s parlour music, “For We Can Love No More.” Courtesy Elizabeth Matheson.

Eliza’s subsequent letters tell the story of her coming of age – her path through adolescence, school life, friendship, belleship, courtship, and engagement leading towards her ultimate goal of marriage to her friend of ten years, Tristrim Skinner of Edenton, North Carolina. His letters to her tell us about his bachelor days, his strong sense of filial duty, his dedication to the “mysterious art of farming,” his political grooming, business travels, and, finally, his cautious, secret love for Eliza. Unique for their depth and continuity, these letters are the first published southern courtship correspondence from the 1840s and suggest new ways of understanding white southern womanhood and manhood. They tell a gentle, complex, love story that illuminates the culture of romanticism in the 1840s South and chronicles the challenges faced by one particular young couple separated by distance and age. 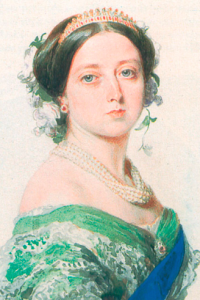 It would be convenient to posit an orderly development or consistent pattern of southern courtship rituals from the time of the early republic until the advent of the Civil War but any such view must account for two important disruptions in the 1840s: the ten-year depression following the economic crash of 1837, and the influence of the accession of eighteen-year-old Victoria to the throne of England in the same year. Neither the impact of the “lean years” with their concomitant requirements of restraint—living within one’s means—nor the influence of Victorian romanticism on southern cultural practices should be underestimated. Because the Skinner-Harwood letters are such a rare example of 1840s courtship correspondence, it is impossible to tell how representative or anomalous they might be – how much they adhere to prescribed courtship rituals and follow the conventions of the genre of courtship letters, or how much they are the product of the writers’ individual situations. We can begin by making educated guesses.

The term “courtship correspondence” loosely defines Tristrim’s and Eliza’s letters and is both more and less than what nineteenth century etiquette manuals, letter-writing guides, and 1840s fiction[3] suggest for a prelude to engagement and marriage. If it were not for Tristrim’s later admission that he had quietly pursued a plan to gain Eliza’s love since she was a child – that his feelings for her had been constant and unchanging over many years – it would be difficult to view their long sporadic correspondence as a continuous courtship narrative—yet it is. It begins with reference to a “wish” and the gift of a ring, and it ends nearly ten years later with their engagement and marriage. Off the page and face-to-face, Eliza and Tristrim made the significant connections that would lead to trust, intimacy, love. Their letters chart that growth, frame the courtship and refract it, but they do not advance or cultivate intimacy; quite the opposite, in 1845-1846, Tristrim’s letters fail as a courtship vehicle even while they document that failure.

The blending of popular culture and real life can sometimes be so seamless that it is hard to distinguish the one from the other. Tristrim and Eliza believed in the ideals of their time and endeavored to live up to their beliefs. Just as their correspondence could easily fit between the covers of a book like Grantley Manor, so too might that novel’s story be read, as Eliza and Tristrim certainly read it, not as sentimental romanticism but as realism. The key to domestic harmony in the popular culture of the 1840s was romantic love; that ideal both informed and confirmed how Eliza and Trim viewed themselves and their world. The lyrics of the songs they played, the sentiments in the fiction and poetry they read, both mirrored their lives and guided their behavior.

[3] Steven M. Stowe in Intimacy and Power in the Old South, 52-78, examines these three formal texts of courtship ritual.