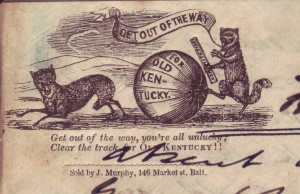 Get Out Of The Way For Old Kentucky

Get out of the way, you’re all unlucky;

Clear the track for Old Kentucky![1]

I take advantage of this, almost the first, leisure hour since my arrival here, to write to you as I promised – The city, since last Monday has been crowded – on my arrival, not a comer was to be found in any of the Hotels where a new comer could find even a pallet. Many boarding houses (not known to travellers) sent in their names to the Committee of reception, stating how many they could accommodate, or rather store away – In company with 20 other North Carolina delegates I was sent by the committee to one of those where we slept 8 in a room – This morning very many have left the city, and John & I have found a room at the Exchange hotel.[2] I suppose that you will see Mr Jones’ Patriot on Sunday, which will give some account of yesterday’s proceedings[3] – But any attempt to give an adequate description of them would be vain. 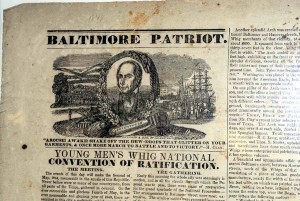 Every state in the Union was represented in the procession, and none, in so small number as was reported to the Marshall.[4] For a great many could not find their Rendezvous on account of the dense crowd in all the streets, added to their ignorance of the city, until some time after the Counting took place. A body of 1500 joined the Pa delegation after the Counting — It is estimated that 25 000 men joined in the procession and near 200 000 spectators filled the streets through which it passed. Three miles of houses had every window crowded with ladies waving handkerchiefs, and flags, and throwing wreaths upon the passing crowd – When we arrived at Canton, a large field 5 miles from the place where the procession started the Prize banner was presented to the state of Deleware , the majority of whose voters were present – Mr Clayton[5] responded to the speech of Reverdy Johnson[6] who presented the flag to the Deleware delegation –

I had the pleasure of seeing & hearing Mr Webster [7] whose speech there was very gratifying to his friends – as he be openly expressed his opinion on some subjects, on which the people doubted his faith, in favor of the party.[8] I said that I heard him, though I could not hear him well. The mass of people who arrived before our delegation placed me far from the speakers, with the additional disadvantage of having the wind blowing from me towards them – It commenced raining at 3 oclock when we dispersed and returned to the City – Parties are collected every hour at all public places hearing speeches from public men and they do not stop before two oclock in the morning – Residents in the city say that this convention surpasses that of 1840 very far. There have been at least 60 000 strangers here. For the convenience of travellers 5 lines a day pass to & from Philadelphia – A great number have left today –One very visible effect which this convention has had on the people is the confidence which it leads them to have in each other – I have fallen in casually with many men from both North & South, perfect strangers to me & I to them – And after a conversation or a walk with together we would part with a cordial shake of the hand, as though we were old friends. Henry Nash[9] arrived here yesterday, and though too late to form in the procession he joined us at Canton. Last night our Delegation met at the Exchange and listened to speeches from him & Mr Barringer[10] — After our meeting dispersed Mr Webster who happened to be in that house was called for and we heard a short speech from him. I met with Mr Kennedy from Jefferson County Va [11] He inquired particularly after you and hopes to see you next summer — 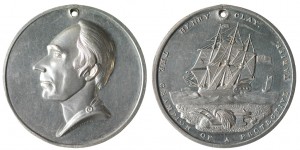 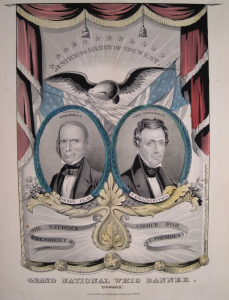 Many pockets have been picked, & coat tails cut off – Several thieves have been taken in the act of picking pockets and imprisoned – I have not lost any thing — A great many complain today of being foundered and now have their ordinary voices – being hoarse from cheering yesterday — I have never before heard of Mr Frelinghuysen[12] the nominee for the vice presidency but he is now spoken of in the highest possible terms –