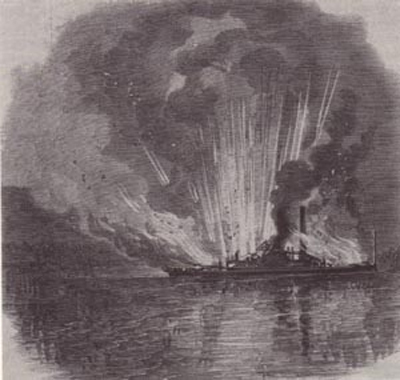 Burning of the CSS Curlew at the Battle of Roanoke Island, February 9, 1862. Frank Leslie’s Illustrated Newspaper 1862.

Tristrim Lowther Skinner owned a one-fifth interest in the Albemarle Steamship Company, which operated the Stag and the Curlew. He and his partner (and former brother-in-law) Dr. Thomas D. Warren, also owned the old India Wharf property in Edenton.

The iron steamer Curlew was appropriated by the Confederate Navy in 1861, and after being shelled in the battle of Roanoke Island on February 8, 1862, was run aground and burned the next day.