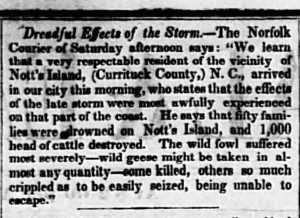 The Great Gust of 1846 was a severe coastal storm that lasted from February 27 to March 2 and caused $500,000 in damage. Norfolk recorded tides up to five feet above normal; fifty families drowned in North Carolina. William S. Forrest in “Historical and Descriptive Sketches of Norfolk and Vicinity” (1853) recounted:

“Saturday, 28th. The snow was several inches deep, and rain began to fall during the day, which continued until noon on Monday, March 2nd, when the rain gave place to hail, which fell rapidly, the wind continued with unabated violence ’til midnight when it increased to a terrific hurricane, which tore off roofs of buildings, uprooted trees and demolished fences. The tide rose to an extraordinary height. Never since 1825 had it risen so high. Wide Water Street and the streets, lanes, and wharves below were completely inundated and very large quantities of merchandise…were destroyed.”